As companies grow and expand, they often want to find creative ways to display and celebrate that growth. As Southeastern Mills was preparing to open their new distribution center, they desired just that.

Unique installation projects offer some of the most creative freedom and challenge our abilities to blow our clients away. Check out how we came up with this Distribution Wall. 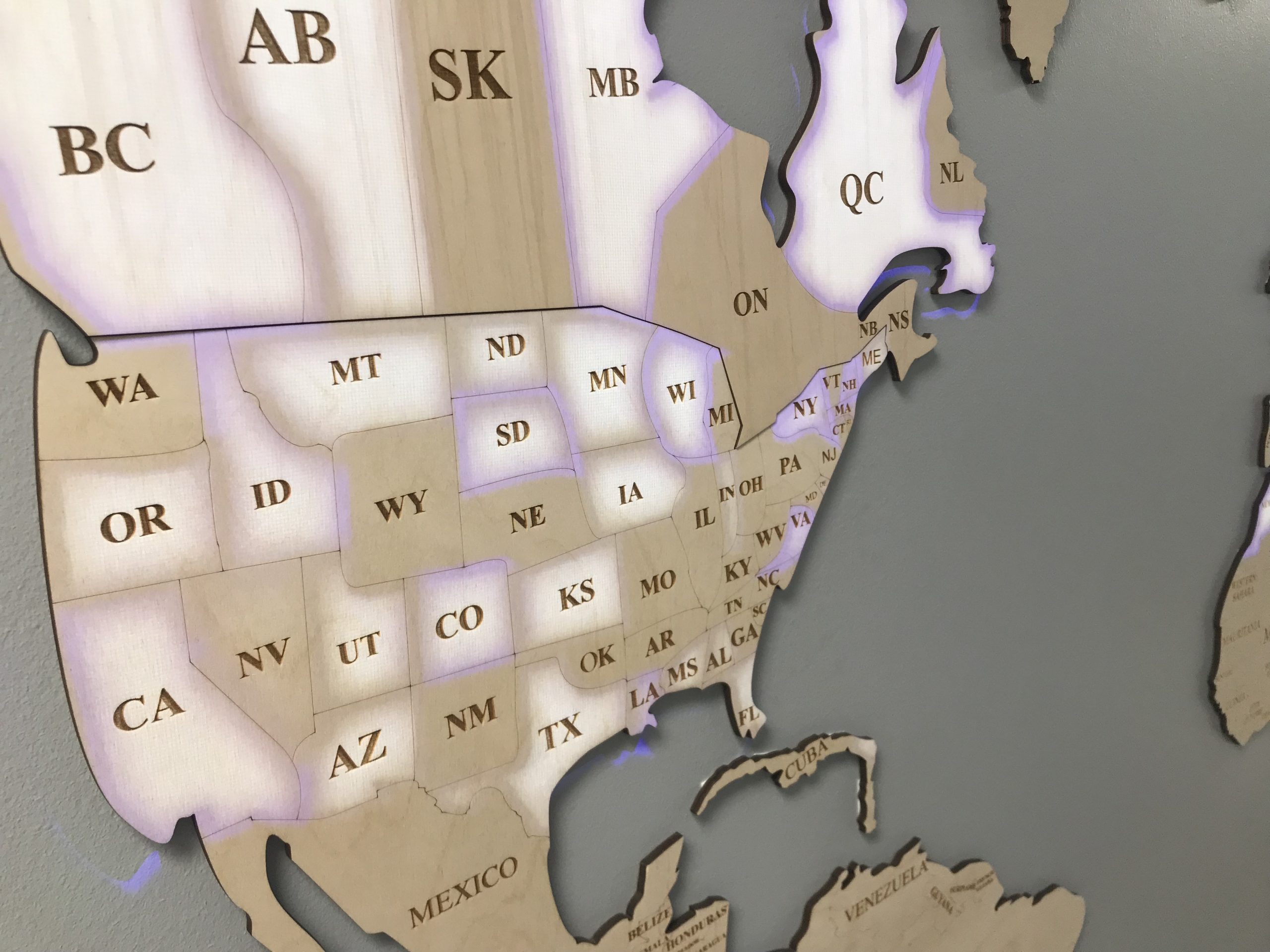 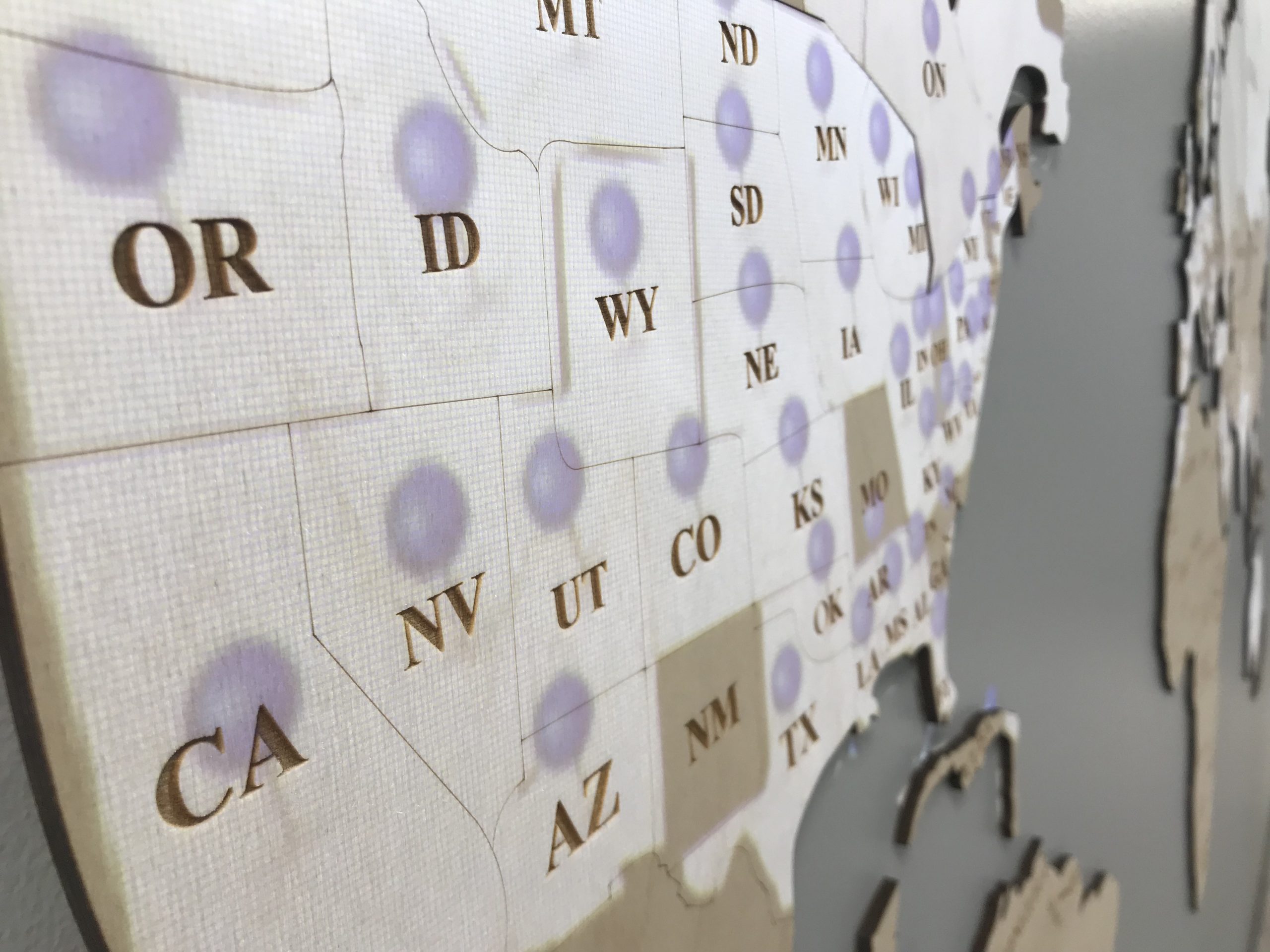 For the first time in over 20 years, Southeastern Mills was building a new distribution center that would open October 2019. The team reached out to Overtone Agency to create a unique centerpiece that would show their global reach where Southeastern Mills products are distributed. The installation would be featured on a 12-foot-long wall near the lobby entrance and needed to be compelling and interactive. With less than four weeks to complete before the grand opening, we had to control the whole process by sourcing materials and limiting outside resources. We also had to find a balance between being able to work on this project before materials showed up.

We were to create a website that showcased Jody Noland’s books written while also promoting her as a speaker, author, coach, and friend. The goal was to take what was already created with Leave Nothing Unsaid and rebrand it to focus on the new elements of Jody’s career that she wants to be featured now too.

A successful outcome would be to deliver and launch this website with rounds of revisions completed by the launch date of her newest book, Good Grief!.

This project was quick-turnaround and required all hands on deck to make happen in the timeline given. We presented four very different options to feature the global distribution of their products on the distribution wall. The first was a wood map with a product fill. The idea of this one was to get a map made out of wooden pieces that would be stained and sealed. A layer of plexiglass that is cut to fit the outline of the map would be applied on top of the wood map outline, where areas of the map that Southeastern Mills distributes to could be filled with raw ingredient items that are used within their prominent products (wheat grain, dried peppers, etc.). The challenges of this one would be ensuring that the compartments are airtight to prevent pests and spoiling of the products, and small areas such as Rhose Island may be hard to represent. The next option was string art. Nails would be inserted into the wall to creat the points for an outline of the world map, and then segments on the map that are distribution locations would be identified using a bold color string that stands out. This popular design from the 1960s and 1970s has been re-emerged and would be a visually appealing artpiece for their distribution center. We then presented the option of a chalk wall. The selected wall in the distributino center would be painted with chalkboard paint and then a permanent outline of the world map with subdivisions would be drawn or painted on the surface. The distribution locations would be hand-drawn using chalk onto the map, giving it fluidity and flexibility to change and update as time goes on. This option was the simplest and cheapest of the four. Finally, we presented the idea of a map outline with projection animation. The outline of the world map with appropriate sub-divisions would be created with wood and mounted in the center of the wall. An overhead projecter would be used to play a video-loop that we would create to show the distribution locations. Although this was the most expensive option, it would allow the widest range of creative implementaion and could be easily updated in the future as the company grows and changes. We were so excited when they selected this option, because it was our favorite and most challenging and we were ready.

We found an 8-foot long world map made out of wood that had topical outlines and multiple depths that showed U.S. states and countries around the world. We were able to also get the map outline sent over from the producer of the map. Using Adobe Illustrator, we outlined all of the countries and U.S. states that needed to be featured as distribution locations, each in their own layer. Our designer used that outline to create three different video animations. The videos would be created to shows the distribution that would loop continuously when the display is turned on. There are numerous ways that the video could be created and it’s possible to use multiple methods in a single video. For example, arced lines could fly from a central distribution point and land in each location, then filling the location as a whole. The video would be projected using a projector mapping software so that only the areas of interest are illuminated by the projector. This created a magical effect and shows a focus on the area of the map that is being illuminated. An overhead, short-throw and high lumen, projector was mounted to the ceiling and connected to a micro-computer that is concealed in the ceiling.

As the final product, an 8-foot-wide map protruded from the Distribution Center wall and displayed via an animation loop where each of their shipping locations are in the world. The client has three animation options to choose from. The revealing of the wall was featured during the grand opening of their new distribution center. It was truly an honor for us to be there during the grand opening ceremony where members of the company, the community, and the chamber of commerce gathered to celebrate the growth of the company. Anywhere that we went that day, we overheard constant talk about the distribution wall and that is enough to measure our success with.